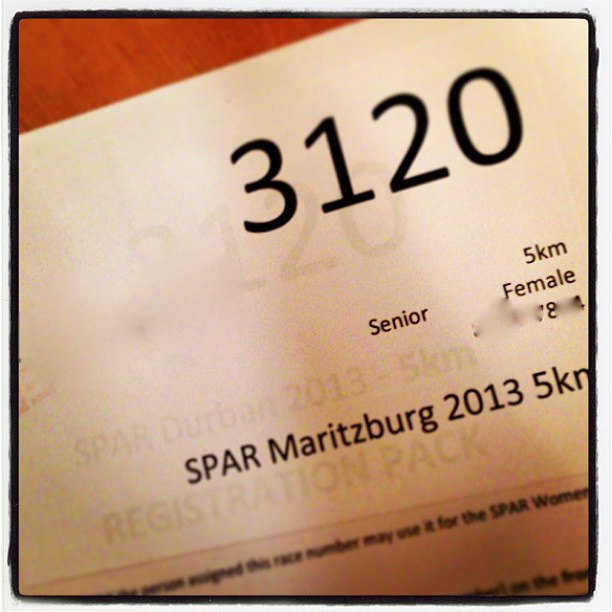 I am shitting myself. Excuse the profanity. But I am.

For those of you who know me personally, you know how big a deal this is: I have entered a running race. I have friends who've gone from being close to obese to running 21km, 42km, 92km races; and even a friend who runs over 200 km with ease. To those friends, this blog post is not for you. Those friends have managed past this hurdle with ease; one might even say they ran past it.

I'm talking to those of us who don't find running to be something that comes naturally. There are those who truly need to work daily in order to even make a few hundred meters progress on a run, let alone shaving off a few minutes. I am one of those. It's not easy. Or even fun. Honestly, I'd rather not run than run. I can't deny the benefits are not only physiological, but also psychological.  Everything feels better after a run. And yes, it pains me to actually admit it.

So how did I end up entering a race? Well, that stems back to my 33rd birthday. I set myself a few goals. Running 5km in six months was one of them. And it's the only one (goal) I haven't failed at and so I am determined not to. Tomorrow is race day and I have six months of work to account for. I am immensely chuffed that I am even entered, don't get me wrong, but I am overly concerned that I am being tested. You know that feeling - when you've studied for an exam but you just aren't sure it was enough or the right stuff?

So this post will be brief - to be edited or added to tomorrow. Or maybe the day after, if tomorrow goes badly.

And naysayers, I hear you - it is only 5 kilometers, but for me, its the same as running a marathon. I don't look like a runner, or run like a runner, or even think like a runner. BUT I have become one - by hook or by crook. I certainly didn't see this coming when I bought a pair of trainers last year and the saleswoman told me they would even work for road running.

So the race is in the morning. 4000-ish women. Me and a mate attempting it together with a few other mates. I have the energy gels. And the sports bra. And I am off to bed for a good night's sleep (or a few hours of reading in silence....?)

But while I was packing the dishwasher and unpacking my goodie bag from registration (not really worth the pain, if it goes badly, by the way,) I got all excited... it was that thing that other runners have told me about and I never believed existed.... I thought, if tomorrow goes well, maybe next year I will do the 10 kilometer?